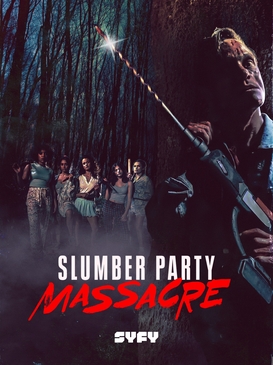 Slumber Party Massacre – This one was surprisingly not that bad. It’s a SyFy original movie, so of course I was expecting the worst, but I ended up enjoying most of what this “remake” had to offer. It had plenty of references to the other films in the franchise, which I admit I haven’t seen, but the film also did its own thing. And of course for an added bonus, the gore was pretty nice. I say it’s worth a RENT.

Butchers – This Texas Chainsaw Massacre inspired slasher was a bit too generic, if you’ve seen a movie like this before, this doesn’t have much new to offer you. The writing wasn’t bad, as the killers got a few good lines in. The ending however is absolutely terrible. A RENT.

Rent-A-Pal – This one has been on my list for a while now, I just never got around to watching it. Interesting enough concept, the acting was really good, not a whole lot really happens however. Worth checking out if you got time, but not essential. RENT.

Titane – Oh boy. Plot goes like this. A female killer has sex with a car, gets pregnant, goes on the run and pretends to be a fireman’s missing son. Yeah, it’s French, what gave it away? The little plot this movie does have hits a wall about 20 minutes in. Then nothing really happens until she gives birth. It sounds more interesting than it actually is. Reminded me of another movie I watched not long ago, Sound of Violence, which was equally as stupid. SKIP.

Night Teeth – What vampire pun should I make with this one? Vampire movie with no bite. Nailed it. There’s a lot going on in this vampire world, but most of the time we are left in the dark with how things run/work. It’s also really tame and predictable as the action/violence is fitting for its PG-13 rating. And we all know how I feel about a PG-13 horror movie. Having said that, I didn’t hate it, but it also felt like it was lacking something other than just gore. RENT.

Fear PHarm 2 – I don’t know why I even bothered. The first film which I believe I reviewed last year, was godawful. For some reason I thought I’d now give the sequel a try. Shocker, it was even worse. The plot might be the dumbest thing ever thought up by anyone. They use a corn maze to grab people to use their skin for skin cream. But they end up selling this cheap shit on infomercials. Aside from the terrible plot, the acting is just laughable. And the writing is like a child wrote it. HARD SKIP!