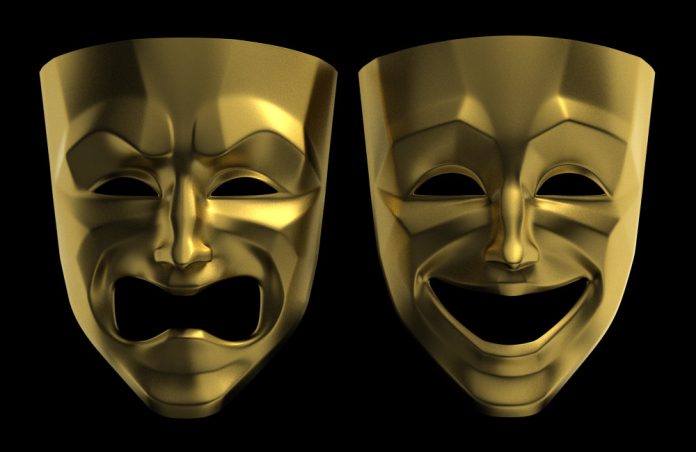 It was foretold by an oracle that Laius would die at the hands of his son. Trying to prevent this, Laius orders his newborn son killed.

No one wants to be the person who offs a baby (and since the story depends on his being alive), the infant is eventually delivered to another king, and raised as Oedipus.

As he grows, The Oracle tells Oedipus that it is his fate to kill his father and marry his mother.

So thinking he’s doing them a favor by leaving, Oedipus leaves his “home” only to meet his real father on the road, where they quarrel and eventually Oedipus kills Laius.

On top of that, he defeats a gatekeeper (the Sphinx) by solving a riddle, and wins the ultimate prize, marriage to the queen of the city, who also happens to be his mother.

I remember this story in particular as when I finished it for a college English class I literally thought, “Holy shit.”

As Roy and I discussed what he says is often called hubris in storytelling, I found it interesting that the actions of the characters in the story caused exactly the outcomes they were trying to avoid.

(Hubris means extreme pride or arrogance. Hubris often indicates a loss of contact with reality and an overestimation of one’s own competence or capabilities, especially when the person exhibiting it is in a position of power.)

It’s also interesting that the basics of storytelling have been around for generations. The same thing the greeks were doing with all male actors in an outdoor stage, are the same principles we pay ten dollars to see on the big screen.

Sure we can give the nuts and bolts updated names, but it’s still valuable information we should use to our benefit when writing a story.

This has been an article idea that’s floated around in the back of my head for some time, but after Monday’s amateur script review of Overhaul I felt it was time to commit it to paper. (I also hope it’s an idea we can all expand upon.)

The idea that the protagonist’s actions cause his demise or success is a powerful storytelling tool, and I think more of us could make use of it, especially if the one thing they need to do goes against everything they believe is right to begin with.

As we look at our plots, are events just happening to our character, or did our character INFLUENCE some of the major points?

Powerful storytelling, sure, but this also helps tie things together. The more the plot is connected, the more it flows. This technique is one more way we can throw the reader or audience for an unexpected loop.

Here are a few more examples.

Lord of the Rings

Sure it would have been easy, and Gollum then couldn’t have ratted them out to the dark lord, but that action would really only have delayed the inevitable.

Instead Gandalf suggests it’s not for them to decide Gollum’s fate.

By leaving him alive, Gollum is free to cause trouble, but he also helped the two hobbits navigate Mordor successfully. Doing what seemed like a bad decision resulted in the outcome everyone was hoping to.

On top of that, at the end Frodo didn’t have the strength to toss the ring into the fire, so had they have killed Gollum earlier, who knows how things would have turned out.

Looking at it properly, it’s actually Gollum who saved the entire realm and ushered in the Age of Man.

Probably the example I’m most familiar with since it’s been done multiple times in comics, cartoons, and movies.

Peter steps aside and lets his uncle’s murderer slip right through his fingertips.

Had Peter done the right thing and stopped the thief when he had the chance, his life would have been drastically altered.

The world may have been short one superhero, but a boy would have kept his family intact.

Probably the silliest, and worst example of cause and effect.

I’m referring to the Jedi Prophesy of Anakin being “the one.”

First of all, “the one” is told to bring balance to the force.

Um, you’re countless Jedi against what, two sith at a time? Balance is the last thing you need.

That should have been the Council’s clue right there, and even if we knew Anakin would eventually become Vader, Lucas should have worded his prophesy better so the Jedi didn’t look like morons.

Anyway, back to the cause and effect.

By trying to find “the one” the Jedi Council brought about exactly what it had feared, the murder of almost all Jedi and the enslavement of the galaxy.

They should have followed Yoda’s instructions and just Anakin stay a force sensitive kid.

But because they did what they thought was right, they brought about what was wrong.

(Without it though, we’d have been short one smooth talking smuggler.)

There are some examples, but like all suggestions, give us the same, only different in your scripts.

The idea I’m hoping you leave with is to break your plot down, and see if there’s not a few opportunities like the above where something small yields something very dramatic later on.

Writing a note meant only for a diary.

Selling the key that opens an unseen door.

A butterfly flapping it’s wings in Africa, and Central Park gets rain.

What part of your story can you make unique, while also flooring your read with a WTF moment that ties it all together?

Is there a scene where a minor character causes something to happen that would be more powerful if your protagonist did it?

Can your antagonist unknowingly cause an action early on that your protagonist stumbles into?

Roy likes to describe this “cause and effect” idea as the protagonist leading to their own downfall or success, which is good, but I don’t think it needs to be the entire story.

Subtle events can add awesome tension and drama, which eventually lead to your climactic conclusion.

The idea I had for Overhaul, was very similar to the Spiderman example.

In that script, the main character kills a druggie. That druggie’s family orders a hit on the protagonist, who then loses not only his family, but the lives of his partner and the partner’s family.

A very tragic set of events.

The problem was that the main character needed to be introduced earlier in the script, and since he was a veteran cop always busting the chops of the noob cops, a perfect scene would be for him to let the bad guy go initially instead of pressing the bad guy for his crimes and associates.

Not getting the associates early on leads to the entire rest of the story, so in the end the protagonist has no one to blame but himself.

Powerful storytelling that’s one step closer to our ultimate goal, an audience leaving the theater satisfied.

We’d love to hear more examples, so feel free to leave us a comment here.

If you’re at a particular point in your story and want outside suggestions, please feel free to spitball any ideas on how to tie your story together.

That’s what we’re here for.

Let Us Prey – The Importance of Titles

Options – It’s NOT All About the Money