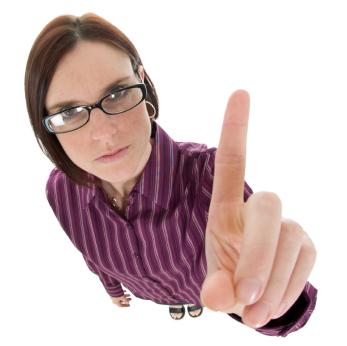 Today’s article is a discussion Roy started in our forum, which several of you have added to.

We wanted to take a bit of time to expand on his initial seven (and round it off to a top ten list with help from Mr. Jennings) as these are good suggestions on things to avoid while writing.

Like he stated in the forum, this isn’t a “be all, end all” type list, but it does contain quite a few common problems we’ve seen in a lot of the scripts we’ve reviewed. (If you’ve got other suggestions feel free to add to this list in the comments.)

In addition to expanding on the problems we’re also going to give some examples of pro scripts that contained these problems. (I fought for pro scripts, while Roy “Mr. Meanie” Waller, wanted to call you all out individually. You can thank me in the comments, lol.)

Most of the scripts are in our Read Scripts section, but if one isn’t and you’d like to take a look for educational purposes, contact us on the forum or shoot us a note via the Contact Us page.

Subtext is an AWESOME thing to have in a script. Most of us strive for it, and our reader or audience is getting clued into our story without even realizing it.

Unfortunately, once we accomplish the subtext, we still feel the need to spell things out for the reader. This is overtext.

Think of it as showing a character doing an action, and then having that character say they’re doing the action in the next line of dialogue…only with subtext. Essentially the writing hints or implies something in an initial line of dialogue, and then spells it out in a following line.

This one’s kind of a no brainer. Roy and I have both railed against this.

Whether it’s the “pope in the pool” technique or not, exposition tends to slow a script down. Sometimes it’s vitally important to our story, or else the reader is lost, but in most cases I would refer to Roy’s article on incluing as that’s a much better technique for getting the info across.

However, the one EXCEPTION (and I can’t stress that enough) seems to be Inception, where the script was still a page turner as the exposition was so mind blowing you couldn’t put it down.

Unless your name is Chris Nolan, then there’s a 99.99999999% chance your exposition isn’t mind blowing, so either get rid of it or go the incluing route (or iceberg exposition as Roy calls it).

This is where the beauty of inferring comes in.

We don’t need to see each individual action performed by a character.

Bob gets in the car.

Bob doesn’t walk up to the car, unlock it, open the door, sit down, swing his legs in, then close the door.

We should only be including the actions that are vital to the plot, anything else bogs down the story and bores a reader. (Plus why write it all out when our minds will naturally assume all that stuff happened anyway?)

This almost goes hand in hand with the previous example, and most of it can be eliminated by entering a scene late.

Some examples of this are:

We don’t need to see your characters talking like this.

Remember, we should always be entering a scene AFTER these pleasantries have been exchanged and leaving BEFORE the goodbyes are started.

Review Example – The Empire Strikes Back (A lot of Han’s dialogue that was later changed to good one liners.) and All You Need Is Kill (The soldiers’ dialogue while in the tents.)

This has to do with a character stumbling through random events.

Your scenes need to be driven by the engine of your story, and all work towards the goal of your character.

If you don’t do that, you protagonist will more or less be going from one random thing to another. Most of the time these are cool scenes, but cool isn’t enough, they need to serve a purpose.

A character can’t be experiencing things just because you wrote it that way.

Characters need depth. They need to feel like people when we read about this brief 110 pages of their life.

If we can’t feel for or identify with your characters it doesn’t matter how many things blow up, people die, or treasures are won. We won’t care.

The more you know your characters, where they came from, what type of personalities they have, what their favorite ice cream is, etc. the better your script will be.

(Some suggestions on character development have also been discussed in our forum.)

Review Example – Inception (With so much time spent on the exposition, not much was left for developing the supporting characters.)

The EASIEST problem to solve.

A reader will forgive a few of them, but once you have more than say 5, you’re doomed. It’s brought the reader out of your story and into Roy’s favorite place, Grammar Land.

Plus typos signify that you didn’t spend the time properly revising and editing your story. If your story isn’t important enough to you to fix these things, why should it be important to a reader?

Review Example – The Brigands of Rattleborge and Source Code

When we start writing, we generally have a collection of great scenes in our head we want to include.

The problem arises when we don’t have enough to get us from point A in our story, to point B. We need certain aspects of a story.

Call it a 3 Act Structure, Blake’s Beats, etc. there’s meat to a story that we MUST include or it won’t matter how good the beginning and ending of our stories are, the fun part is getting from one to another.

Review Example – For these last 3 “sins” Roy and I couldn’t find a pro script that stood out. Feel free to browse our amateur reviews or list a pro script you think fits the bill in the comments section below.

If you’re writing a comedy, make sure it’s funny.

Since comedy is subjective, try to find a sampling of people that seem to vary and read them your dialogue or the situation. If most laugh then you’re on to something. If none laugh, you’ve got a problem.

This is a big issue for me, and one of the reasons I don’t write comedies, because stuff that’s funny to me is either very in the moment, or not funny to others.

Will some of the comedy be in the delivery from the actor? Sure, but the actor can’t make something out of nothing. It’s important that the “seed of funny” is sewn into your story so they have something to work with.

10. FADE TO BLACK that is long overdue.

Lord of the Rings – The Return of the King.

I’m talking about the book. This is the perfect example of not knowing when to call it quits.

If you read the book, then you know what I’m talking about, but if you didn’t, know that the hobbits didn’t return to a perfect Shire. There was a whole mini-story in there at the end.

Don’t drag your story out. When things are finished, STOP WRITING!

Nothing will piss a reader or audience off more than when your ending drones on for 10+ pages.

Want to know the best time to end your story? Early.

As long as your plot’s finished, leaving them wondering about a few things is what gets you the big bucks writing a sequel.

Where to Mine Ideas for Your Contained Thriller

And the Oscar Goes to…Not Diversity.