If there was a horror movie this month, I was most excited to see, it would be Terrifier 2. I’m not the biggest fan of the first film, though I did enjoy the Art the Clown character. I’ve seen him pop up before in anthology films and he’s always the best thing about them. But after the first teaser trailer to the sequel, I was pretty hyped for it. It’s a fantastic trailer.

I will say, there is a style of horror films I kind of dislike. The kind that features nothing but kills, with very little to no plot. The best example I can give you is this film called 100 Tears. Another film featuring a killer clown oddly enough.

100 Tears is essentially kill after kill, with very little acting involved. When there are some plot moments, like say dialogue between characters, we get these poorly acted scenes that will make you cringe out of embarrassment.

There are a few movies like that, it should really be its own genre. Hell, maybe it is. A film called Violent Shit is another example. These films have nothing more to offer you than over the top gross kills. Don’t get me started on what the Japanese have going on with simulated snuff films like Tumbling Doll of Flesh. Those films just aren’t for me.

The first Terrifier I think does fall under that category of horror film. The only thing that elevates it however is the character of Art the Clown.

Terrifier 2 tries to be more than just a 100 Tears type of film, by delivering us a story with actual characters. This time taking shape of a family dealing with the death of their father.

One downside I will say about this film is it brings up a ton of questions but answers very little of them. A few important ones revolve around this family. I would have liked at least some answers to maybe help some things at the end make sense, but we are left with nothing.

Hell, we end on an even bigger mystery that asks even more questions! I’m figuring a lot of these answers will be answered in Terrifier 3. Seeing how easy it was to fan fund this film and how well it is getting reviewed, another sequel doesn’t seem that far off.

Terrifier 2 is long, over two hours long and I know why as some of the kills in this go on for a while. If they trimmed it back a bit, it would shave off like 10 minutes from the film. But this is a movie funded by the fans, made for the fans and the fans want gore, damn it.

Just be careful what you wish for as the violence is pretty gruesome to behold.

There were reports of folks in the theater fainting and puking during screenings. If that isn’t just a publicity stunt to stir up attention, I have a pretty good idea where in the film it might have been too much for people.

If I had to guess, it was around the scene where Art tortures one of the lead character’s friends. And I don’t just mean tortures her, I mean fucks her shit up. It is brutal. It is gruesome and it is really hard to watch.

That’s also when I started to notice the inconsistency to the gore SFX. Sometimes it looked damn good and other times it looked kind of cheap. All practical effects by the way, so I applaud them for not skimping out and using CGI.

But I have a theory with regards to the inconsistency.

This film was meant to have a pretty quick shoot time, only three weeks from what I remember, but had to shut down last year because of covid.

In the meantime, we got a teaser trailer, most likely using the footage they already had filmed, using the effects for that shoot.

If I had to guess, the downtime gave director and special effects creator Damien Leone more time to work on the special effects. That would explain some of the effects looking meh, and others looking pretty damn impressive.

I could look this stuff up, but I enjoy making wild accusations and seeing how accurate I was when I made them.

There’s also a ton of head related kills. One head explosion even rivals that of something you’d see in Maniac. Like I mentioned in my Halloween Ends review, we just don’t get enough head explosions these days.

So, the film takes place almost immediately after the events of the first film. If you remember, Art was shot in the eye, and the back of his head exploding. 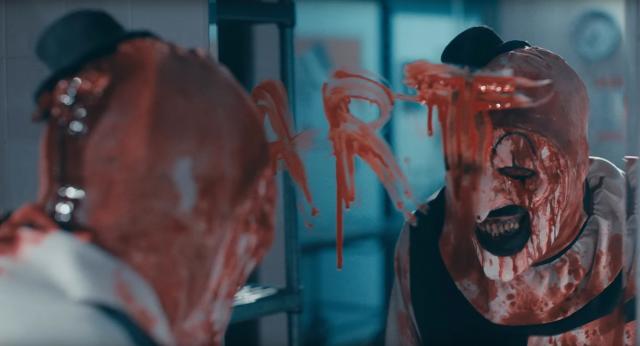 He wakes up to kill the coroner, making his return to the living, answering the question if Art is supernatural or not. Yes, he very much is. Which I think they answered in some of the shorts, I can’t remember now.

Art decides to clean his blood-stained clown suit at a laundromat, and this is where we are introduced to a brand-new character in the shape of a little girl who looks exactly like him, but somehow even creepier.

After she poops on the floor, the two of them play pattycake while his clothes get clean.

It then flashforwards a year later picking up where the first film left off once again, as the movie had two endings. The first being Art resurrecting and the other, Vicky, our survivor girl from the last movie telling her story on a talk show where she goes nuts and mutilates the talk show host.

Our main characters are the Shaws. Sienna is putting the final touches on her Halloween costume, as she’s a cosplayer it seems. The design is of a valkyrie, something her father drew before he died tragically. Or is it meant to be an angel? An angel would make more sense seeing how it ends and all.

There are a ton of unanswered questions about her late father, as not only was he getting visions, but visions of Art the Clown as well, drawing him in his notebook which his son Jonathan now possesses.

Jonathan is a bit of a weirdo, he has an obsession with Art, even wishing to go dressed up as him for Halloween. Which his mom is rightfully adamantly against.

After working late on her costume, Sienna has a weird dream about Art on his very own children’s show. At first, I thought this was just a random dream sequence to add in a bunch of interesting kills, but I feel like there was a meaning behind all this, but again, the film doesn’t like to give you answers to things, so I have no idea.

In the dream, which by the way, is still a cool sequence, Art hands out candy to the kids, with Sienna being one of them.

He then later pulls out a tommygun and shoots everyone. To finish everyone else off, he whips out a small flamethrower.

That’s when the dream bleeds into reality as the candles on her dresser suddenly ignite, burning her angel wings she worked so hard on.

And it isn’t like this also doesn’t connect to the story, as she now has to go to a costume shop to buy some cheap wings. That’s when she runs into Art.

This is actually my favorite part in the movie, where Art is just putting on goofy glasses as she’s trying to check out.

Oh, I forgot to mention the sword. So, this prop sword is also somehow important. Though I guess it isn’t a prop since she warns her brother not to mess with it because of how sharp it is.

I believe she mentions it belonged to her father, so again, another connection that I’m in the dark about.

Jonathan also has a run in with Art and the little girl at school as he walks in on them playing with a dead possum in the hallway, pinning it on Jonathan, getting him expelled.

Now knowing Art is real, he flips through his father’s old sketch book with a ton of articles relating to the killings Art committed last year and the death of that little girl we keep seeing everywhere.

Sienna goes to a party at a club, where one of her friends doses her with molly. She starts to see the little girl dressed like Art and freaks out, causing her friend to take her home.

Their mom gets in a fight with Jonathan, causing him to run away. She notices their car in the garage has been vandalized, believing it to be Jonathan, only to find Art in the driver’s seat armed with a tiny sawed-off shotgun. Which I believe is called a pig’s knuckle if I’m not mistaken.

This is where we get our head explosion, shooting her right in the face.

Jonathan eventually returns home to find his mom’s corpse at the dinner table, with Art stuffing mashed potatoes in what is left of her face.

As Sienna goes looking for her brother, Art pays her friend and her boyfriend a visit, stabbing him in the dick multiple times and chasing, Brooke was her name, into the haunted house portion of the carnival called Terrifier.

Here is where things start to get kind of weird.

So Jonathan is passed out, Art begins eating him. I don’t really know why, or why this place is important, but they were led down here for a reason.

Sienna and Art fight again, but this time gets stabbed by her own sword and I guess dies. I’m not sure. But her body is dumped in some kind of portal where she is resurrected and cuts Art’s head off.

The creepy little girl takes his head and disappears. But that isn’t the last we see of Art as we cut to the after credits where we hang out with Vicky in the insane asylum after her brutal attack on the talk show host.

She then gives birth to Art’s head.

Yeah, I’m as puzzled as you are.

I guess I could try to give my interpretation, but I know it will be wrong.

I’m guessing Art is some kind of demon that only comes out at Halloween. It seems that Sienna’s father because of his brain tumor, was getting visions, maybe from god, warning him of the coming dangers, but was killed in an accident prematurely.

But why Art was focusing on this family I’m not sure.

What Art is exactly is probably best left up to your imagination. I guess I do like knowing that we will probably never get any answers to some of these questions.

Just think how more interesting Pennywise would be if we didn’t know he was just some space spider.

Terrifier 2 I think is a must see for this Halloween. It’s showing on something called Screambox, which seems to be exactly like Shudder. But if you have amazon prime you can get a 7 day free trial. So basically you’re getting to watch Terrifier 2 for free.

This absolutely gets a SEE IT rating. However, just be prepared as it will test your tolerance for gore and violence.