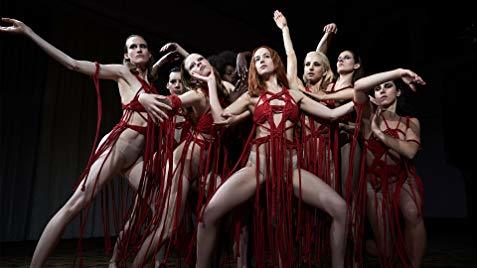 An excerpt from Reals’ script review for Suspiria which will be available 11/05/18:

— Pg. 28 – 29 – This is a little bit creepy – the scene with Olga stuck in a room of mirrors, unable to escape and being murdered by an invisible presence.

Without warning, Miss Griffith, the secretary from the front office, takes a knife from the table and cuts her own throat.

What I mean by this is that a creepy image with no context or story-purpose is just that: one creepy image. The most horrifying things put on film are so shocking because they have been built up and are happening to characters that we care about.

KLEMPERER
Love and anarchy have lived in the same houses for centuries. They are forever friends.

— Pg. 66 – I like this line, but it is in direct contradiction to what we have seen happen.

KLEMPERER
I do not believe in magic. People can organize themselves to perpetrate an evil and call it magic.

— Pg. 69 – This is a good exchange because it is quick, not too on-the-nose and really could (and should!) be the end of the conversation. Alas, it is not, but this is a great place to end it.

SUSIE
Nothing horrible is happening, or will happen–

— Pg. 71 – This is good as it gives us emotional impact, but I cant help but feel that it came much too late in the story.

We see Susie running away from home and her sick mother and sisters. This makes us question Susies motivations and, at first, perhaps think that she is a jerk. However, the more we see in FLASHBACKS, the more we will reveal that Susie was abused or mistreated by her mother/family, which is what led to her emotional state and to her running away.

— Pg. 74 – I like this line of description as it conveys the battle for innocence in Susie.

This makes the part of Susie who is simply a young woman who needs her friend smile.

Susie notices Klemperer, stripped naked now, has been put in the center space inside the triangle the table forms. The matrons taunt him, summoning him from one to the next where he is made to eat victuals off of their plates–some of which look like stool, some like organs, perhaps from animals, perhaps not.

What Could Have Been – Star Wars: Episode IX – Duel of the Fates

The Lodge – When a “Fooled You” Twist Doesn’t Work

Theory of Everything – Script Analysis