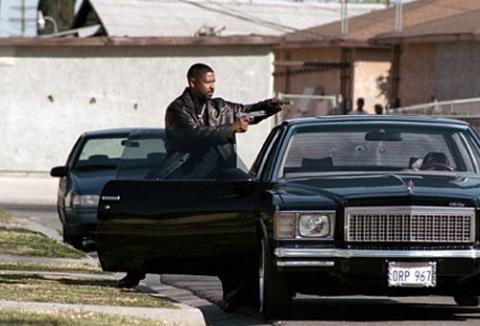 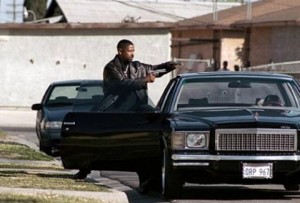 Logline: On his first day on the job as a narcotics officer, a rookie cop works with a rogue detective who isn’t what he appears.

Spoiler alert. That line’s not in the script. Despite that little fact will this still be a good script?

The description was pretty good.

My favorite part about it was that it was kept minimal. The author didn’t feel the need to have it muddle what was going on by injecting flashy description into a scene.

Here are some decent examples:

The gun leather tough LAPD vet is a hands-on, blue collar cop who can kick your ass with a look.

This guy’s a bad ass.

Alonzo gives Jake a beer and grins at him like a proud dad.

Alonzo and Lou converge, trading serious questions and answers with their eyes.

The looks Alonzo gives in this script are pretty good. I think an actor appreciates the hint of direction, but it also spices up things for the reader.

This was used to describe the look of the bathroom. It’s funny, as it seems like the bathroom of a little old lady, but in reality Smiley and crew are about to give Jake an extra large hole in his head.

Again, this script was a PERFECT example of keeping description to a minimum. An important factor to consider when writing, since it allowed the greater parts of the script (in this case the dialogue) to shine through.

Format was good. Ran into 129 pages beginning to end, and this was with an abridged ending. This could be trimmed down.

Other than that, transitions were in there, and I still advise against them, but it didn’t ruin the flow of the story.

There was ONE case of exposition, and I almost feel bad taking off for it because the other dialogue was so great.

On page 69 Alonzo introduces Jake to the Three Wise Men, and it’s a complete dump of who they are. This wouldn’t be so bad if it wasn’t completely pointless knowing what departments they’re from. They call the shots, which was the only important piece of information we needed.

That out of the way, the rest was awesome.

Each line from Alonzo DRIPPED with subtext. Not only that, this script was practically a writing course in “What is the most interesting way your character can say that?”

ALONZO
May I read my paper?

ALONZO
No. You won’t. You fucked that
up. Please. I’m reading. Shut
up.

ALONZO
Tell me a story, Hoyt.

ALONZO
Not your story. A story. You
can’t keep your mouth shut long
enough to let me finish my paper.
So tell me a story.

JAKE
I don’t think I know any stories.

ALONZO
This is my Road Dog’s pad. Wanna
see what he thinks of you.

JAKE
What do I say?

ALONZO
You’ll think of something stupid.

ALONZO
They lost their money, their rock,
got beat down and now the eses
from White Fence are gonna smoke
’em. Jesus, what more do you want?

ALONZO
Is that not justice?

Alonzo’s line after that I really don’t like. It’s one case where he goes on too long.

ALONZO
I’m only aware of six.

ALONZO
— And hard to take care of one.
Fuck you, okay? No one’s going
hungry. Everyone gets plenty of
what they need: toys, shoes,
clothes.

Alonzo shoots a look at Jake.

ALONZO
Let’s not talk about my family.

This part oozed subtext on both sides. It’s really the first time Jake’s able to flip the situation on Alonzo where Alonzo’s out of his comfort zone, and it shows.

Again, if you’re a screenwriter like myself or Roy, and you find writing even mediocre dialogue challenging, this would be a great script to read.

Both Jake and Alonzo stay true to their characters, and that causes a lot of friction between them as they go through the day.

Jake’s the golden boy, which is fine, but the subtext in Alonzo’s lines keeps us wondering (even past the end) whether he’s deep down a good cop just trying to do his best with the shitty world he works in, or if he’s just as much a crook as the folks he’s putting behind bars.

This question has me stumped in relation to today’s script.

I think it made an awesome movie, but given a chance I think it could make just as awesome a play.

Unfortunately I don’t know whether to applaud that or hold it against the script, because utilizing the benefits of the big screen would easily cheapen the plot of the script.

I guess I’ll just award full points, but make you all aware of it, lol.

It’s a good cop vs. bad cop movie. Nothing too original there.

I think what made it REALLY great is Denzel Washington, being that we’d never really saw him in that “bad guy” role. But should the author get credit for that?

Alonzo’s a great character on his own though, and again I think the dialogue lends points to Mr. Ayer’s credit. The one thing I didn’t necessarily like is some of the police related situations that are too common in modern day TV dramas.

We start out being introduced to Jake.

He’s got a loving family, and starting a new job. He’s excited but nervous, so we’re kind of excited also.

If that fact was up for debate, Alonzo calls at the bottom of page 2. His less than characteristic dialogue keeps us reading and leaves us with this.

We’re in for the long haul.

7.) Is that hook effective?

Up to around page 15 Jake’s been riding with Alonzo and finds out he’s a bit rough around the edges.

Then we see one of his “informants” sell drugs to a bunch of college kids.

They go to bust the kids but Alonzo does it in a bit of a less than orthodox way. He draws his gun on kids, having Jake do the same, and lets them go after stealing their bag of illegal goodies and their cash.

This leaves a sour taste in Jake’s mouth and no clearer sign could be given that he’s not in the world of a Van Nuys street cop (his previous job/comfort zone).

The rest of the script has Alonzo doing things Jake doesn’t agree with, but Alonzo explaining he’s got his reasons. It was interesting and kept the story moving.

There was a definite midpoint around page 59 where Alonzo drives up to a police station and gives Jake the chance to get out of the car and go back to his old life.

(However, I will admit that this scene should have been simpler, and not wasted the time to have Jake go inside. He could have easily seen the lazy cops he didn’t want to become OUTSIDE from open door of Alonzo’s car.)

Jake has his dark moment when Alonzo kills Roger. Jake didn’t do it, but he’ll have to say he did or face a lot of trouble both with the drugs coursing through his system and the other cops who will kill him if he says otherwise.

Jake has no choice but to accept, which he realizes is against everything he stands for. Powerful stuff.

The ending was shorter than the film version, but was okay. In the script, Smiley ties more into the plot as he’s acting as the middle man between Alonzo and the folks he pissed off in Vegas. This was cool as it gave him a greater purpose, but also explained more about Alonzo’s trouble than the film did.

The only two parts that slowed the story were the early meeting and introductions with the 3 Wise Men, and the bit of Jake needing to go inside for a page and a half to decide he really wants to make detective, a path that leads through Alonzo.

This film cost $45,000,000 to make while bringing in just over $76,000,000. To top it off it also won Denzel Washington the Oscar for Best Actor, in addition to a bunch of other awards. (Okay most of that might be the acting, but again David wrote a pretty great character for Denzel to use.)

I’ll use my personal experience watching it for the first time, which I believe was on HBO. People kept going on and on about how great it was, and I was convinced it couldn’t live up to the hype.

It did. Not only that, but it was a pretty good mind f-ing.

The one thing I didn’t like about the script was one part at the end.

We already know Alonzo’s not the best person, but having him banging Sara’s sisters while she and his son are outside was too much. The way the film handled it was much better, as he had some sort of love for Sara which means deep down there may have been something worth saving.

This script was a sturdy backbone for a great film.

As mentioned above, the dialogue alone is a good reason to read it, as you can really learn a few things, while at the same time it utilizes just the right amount of description to keep the pace moving.

On top of that, one character in particular was created, and the entire script you’re left wondering is he a good guy that was changed by the environment he’s trying to make right and just got in over his head? Or is he a complete scumbag who discovered a profession and place to thrive?

The beauty of this script and film is you’re left wondering, if Jake had started a month earlier, would he still have stayed true to morals, or would he have turned into Alonzo?

Psycho – An Oldie but a Goodie!

Bloodshot – Time to hunker down!

Inherit the Viper – Have we seen this before?