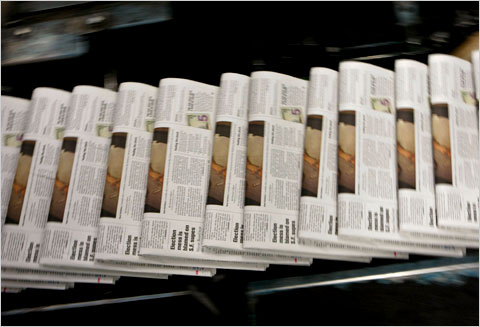 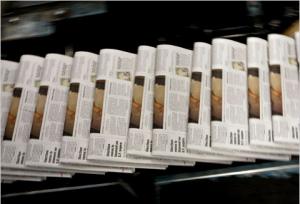 Well, Hank’s at it again.

This time we’re headed down to sunny Florida (I sounded that out as Flor-REE-duh as I typed it) and to the beaches of Miami. A group of reporters chase all over town in hopes of catching stories before the legit papers do.

Without further ado, here’s the review of The Bad News First by Eric Dickson and Simon Colligan.

Before we get started…

PICK…ONE…STORY… More on this later, but I needed to get that off my chest.

I’m going to target my comments toward Eric, as he was the one that contacted us.

It’s apparent that Eric is very familiar with Miami, and either loves it there, lives there, or both. Very detail oriented in that he names specific locations around the city.

Now I’ve been to Key Biscayne (one of my best friends actually got married near the beach there), have had drinks at a restaurant overlooking the bay, etc. and I knew exactly what he was talking about. The only problem is, would a reader who’s NOT been to South Beach or other Miami hot spots be able to conjure up a mental picture?

Another problem with specific locations (and I’ll even lump in using specifics when describing characters) is that, as writers, we limit ourselves to a reader.

It’s much easier to use loose language that can be shot in trendy spots around Miami just as easily as around LA. So we’re back to that age old noob writer question, can we afford to give professional readers reasons to say “no” to our script?

Format was right on the money. There wasn’t a problem there, and it’s actually another great example of how to set up your script…format wise that is.

Quick note though, and nothing horrible, but I’d give it another proofread, as there were two spots where characters’ names were switched with the person supposed to be doing the action, and enough typos to warrant a closer read.

Alright, and I always feel I’m super critical of dialogue, but there were times in this script that felt a lot like the problems we’ve all seen before.

Kurt specifically goes on too long in some places, and doesn’t add much to the plot other than space filling dialogue.

An example from page 50:

KURT
Let me tell you a story, Daryl.

Daryl turns to give Kurt his full attention.
KURT (CONT’D)
Friend of mine calls me up. Asks if I wanna go catch a drink. I say sure. He tells me he’s gonna take me to this new place. It’s crawling with women.

KURT (CONT’D)
His buddy leaves with a different chick every time out. So we go to this place. Top floor bar. Baby grand, and everyone’s smoking a cigar and all the women are dressed to kill.

Daryl rubs his temples, closes his eyes a second.

KURT (CONT’D)
We’re there twenty minutes and there’s three women sitting at the bar, dressed in thousand dollar gowns. They’re not interested in me. They’re checking out my buddy. And all night I tease him. So why don’t you go talk to them? He says I’m pacing myself. All good things come to those who wait. And I say, I don’t know. I think you should go talk to them before they give up and lose interest.

DARYL
Is there a point anytime soon?

KURT
This goes on for three hours. The joint’s five minutes from closing. He’s spent over sixty bucks on drinks before he finally goes over and talks to them. Turns out all three are dudes.

Daryl sighs and slumps forward in his chair.

KURT (CONT’D)
I’m sitting there trying not to laugh. He finally walks back. I ask him what happened. You know what he says?

Daryl thinks it over.

DARYL
I give up.

KURT
He says ’I don’t wanna talk about it’. You get what I’m saying to you?

DARYL I have no idea.
Kurt picks up Daryl’s phone, hands it to him.

KURT
You can either sit and think about what you did wrong or you can pick up the phone and get Curtis to do this interview. You understand now?

Other times characters’ dialogue seems flat, especially the back and forth between Kurt and Darby.

Darby folds her arms like a pouting child. Kurt tries his hardest to hold back a smile.

DARBY (CONT’D)
What do you think? Good?

DARBY
I’ve been working all morning on it.

Kurt takes a seat at his desk, kicks back and sips at his coffee.

Darby hovers over his desk and throws him a disgusted look.

KURT
Like Lisa McKay’s teethmarks all over Lawson’s right arm.

KURT
Or the crack rock she refused to spit out.

KURT
Or the cops finding traces of anadrol in Curtis’s bloodstream.
Just little stuff like that.

KURT
Other than that, it’s a solid story.

Another example is on page 66, but I won’t include it here in an effort to save time.

Basically we all should be going through our scripts and if two characters are EVER just sitting/standing there talking, we need to ask ourselves, “Do we really need this scene? If yes, how can we make them DO something while talking?”

Another thing is the one liners. Everyone’s got a witty comment for everyone else, and it’s a problem. It blurs the characters. Are they all trying to be funny? See my notes from my Blood and Fire review for more on that.

This wasn’t exactly a play, with the extravagant locations, but I had trouble seeing it as a movie. Even with the opening helicopter scene I felt like I was reading a script for a television series that was a montage of episodes.

As I mentioned earlier, Eric does seem to know a bit about the location, and that helped me out. He also included some of the perks that goes along with that sort of lifestyle down in Miami.

The story, as I mentioned above, was a mash up of scenes from crime dramas, and although it had moments it wasn’t terribly original.

Although in the drama category, I still thought the script would be funny too, with the inclusion of “quirky staff”. Them chasing three stories also caught my interest for reasons I’ll explain later. All in all though, I wasn’t dreading reading it, but the logline was a bit generic for what the script presented.

7.) Is that hook effective?
The opening scenes with Friendly were a great set up. I wasn’t sure what exactly was going on, but I wanted to keep reading to find out.

This feeling was INSTANTLY brought to a halt though once we’re presented with the other characters at the office of Grapevine Studios. Marty started talking about what Friendly did, and how the cops were looking at him, and I was left baffled. (Last I knew Friendly was in a bar checking out who he thought was a couple who robbed a Brinks truck.)

Now all of a sudden he was in trouble for some video? I thought a time lapse had happened.

Kurt wakes up in his car, drunk and disheveled which I thought would pay off later, but other than that first scene he never really loses himself.

On top of all that, the main storyline is presented with Lawson being talked about as a shady character, but was muddled by everything else going on.

Too much being thrown at me at once.

Too much and not enough, but let me clarify.

This was THE BIGGEST problem of the script. The whole three story angle, I really expected all the stories to be tied together somehow. They weren’t. As I can’t see a possible way to do so, I’d say drop the Alexis story and drop the Curtis story.

What little momentum there was with the Friendly vs. Lawson story was lost when we had to switch to the others. Daryl working the Curtis story just felt like an afterthought, and honestly had no reason being in this script, since it really didn’t tie into Lawson’s set up other than him grilling Daryl and Kurt in the station.

I’d even drop some of the characters. Rudy can easily absorb into Darby, Daryl and Steve (I honestly couldn’t remember who Steve was when he was trying to meet his girlfriend’s parents) can be dropped, and focus more on developing everyone else with generic support staff, save maybe naming the one camera guy, (Scottie?).

Were they just an internet tabloid? The way they shot stories made it seem like an Access Hollywood type show.

The video that got Friendly into so much trouble I didn’t get. I don’t understand how it was an alibi, and I don’t know what the blow up doll was for. I kind of got the second video where they made fun of Lawson with the newspapers, but even then I felt like I was missing something (which didn’t pay off in the end and left me mad).

Why do half the characters have nicknames that aren’t even close to their names? Do we need their real names at all then?

I really can’t give any exact pointers other than flushing out the true story, which I think is the staff trying to give Lawson what’s coming for him.

As this script was all over the place, I’m not even sure who the target audience is. We have some parts that play like Nip/Tuck, while others feel like CSI: Miami, and the last bit with Curtis and Chris felt like Can’t Hardly Wait.

Another problem was new characters kept showing up. The cast was huge, and I wasn’t sure what demographic they were all meant to appeal to.

Eric, you can format one hell of a script, but after that, the project needs work.

Please don’t take this the wrong way, but what are you writing about? I think that’s a major question that needs to be answered before you start another rewrite.

What are you hoping to see on the big screen? Who is the main character in it? How will he/she overcome the bad guy?

As I mentioned before, this would be a cool TV show if you broke the three separate stories into episodes. This way you could keep the whole staff, make it either a comedy or a drama, and still flush decent stories out in 30 minutes.

Overall note before we part, if you leave us in the dark early on, you better make sure we get a payoff before the end, or you’ll have wished someone shouted, “FIRE,” in the theater.

American Made – Good Characters, Some Flaws