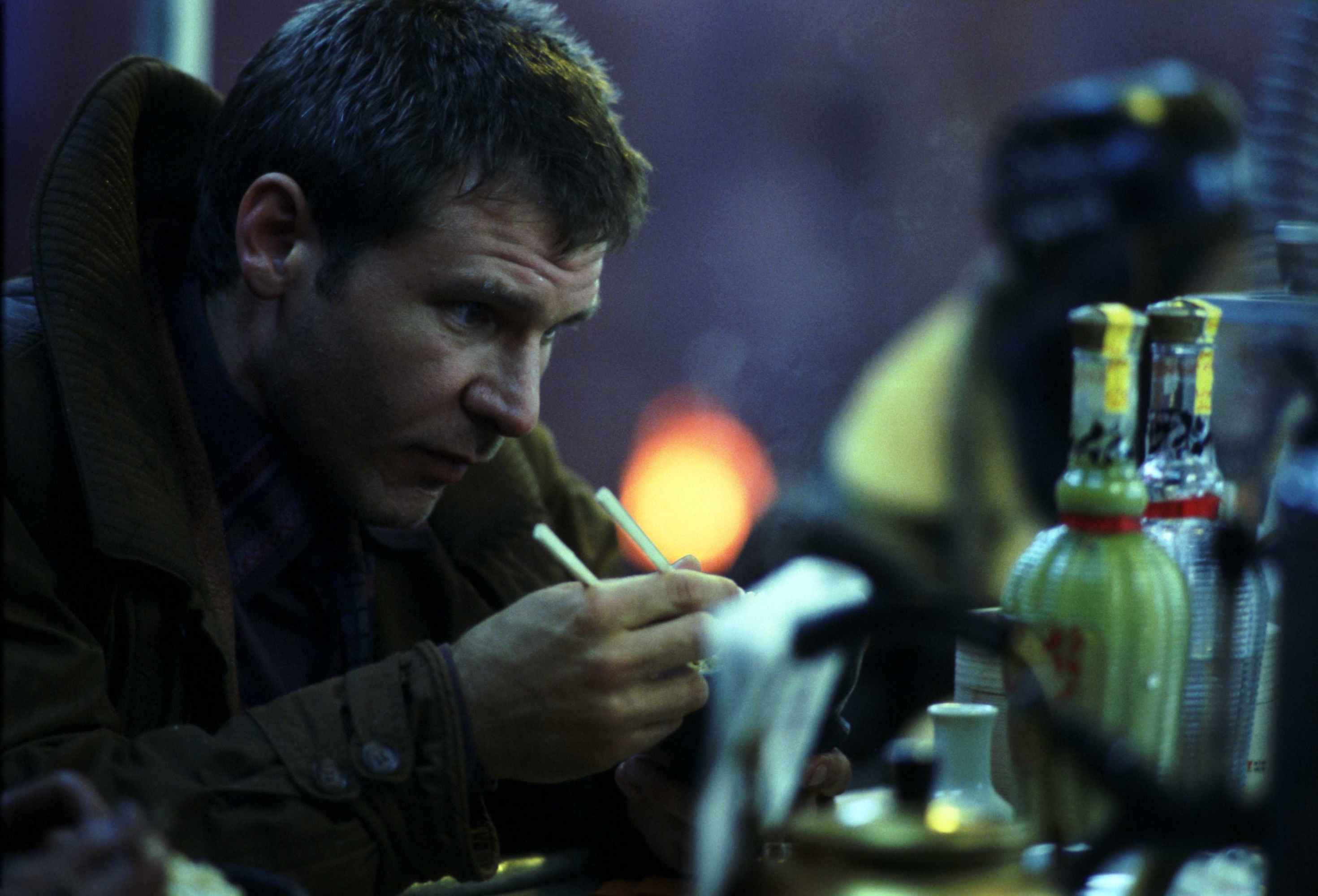 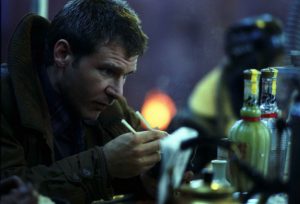 Today we’re looking at one of those movies I’ve seen beginning to end, but never in order and never in one sitting.

On a whim, I thought it might be fun to check out what Harrison Ford did during his down time on the Star Wars films.

Logline: Deckard, a blade runner, has to track down and terminate 4 replicants who hijacked a ship in space and have returned to earth seeking their maker.

The description here was good mixed with bad.

There were some very punchy one line descriptions that seem before their time and the kind of thing professional readers look for in a spec script.

The bad was that there were HUGE BLOCKS of text that were hard to get through.

We’ll start with the good.

Easily my favorite, from page 30:

Batty smiles. You would not want him to smile at you.

Is this in that gray area of unfilmable? Maybe, but it nails EXACTLY how the character is smiling. We KNOW this is not a good smile, and it sets the character’s tone for the rest of the script.

Couple this with an example of “too long” shortly before it, page 28:

The eyeball belongs to BATTY who is standing on
the sidewalk. He resembles a tradition, the gym
instructor, short, cropped hair with the body of a
drill sergeant but the eyes are gray and chilling.
Roy Batty is a presence of force with a lazy, but
acute sense of what goes on around him.

Batty is introduced on page 28, and this is the wall of text used to do it. Now compare that with the line above from page 30. Could we not just say:

The eye belongs to BATTY, athletic and mean with a crew cut.

Then use the line from page 30? That sets a MUCH BETTER tone for who Roy Batty is without overdoing it.

EXT. HADES – DUSK
We are MOVING TOWARD the Tyrell Corporation across a
vast plain of industrialization, menacing shapes on the
horizon, stacks belching flames five hundred feet into
the sky the color of cigar ash. The CAMERA MOVES INTO
a window in the large pyramid-shaped building. A man
is sitting at a table. Another man enters the room and
sits down. The following scene is reflected in the eye
until HOLDEN is seated.

The Spinner makes a sharp bank, drops into a steep
curve and slides toward the vast plain of industrialization,
the menacing shapes on the horizon, stacks
of belching flames five hundred feet into the sky the
color of cigar ash, towards a large pyramid shaped
building.

Pretty much the same thing. Not sure why we couldn’t just use something similar for the second part:

The Spinner works it’s way into the hustle and bustle of the crowded and polluted horizon beyond.

The blimp drifts off among the buildings like a fish
disappearing in seaweed,…

Another good example that creates a great mental image.

Gaff has to smile and nod politely, that’s his job.

This one’s probably my second favorite as it lets you know EXACTLY how Gaff is smiling and nodding. I can see that easily. He’s only doing it because Bryant’s his superior.

There were some others peppered throughout the script, and overall none of the description was really bad. Especially considering the setting that needed to be explained.

One part I HATED was on page 63. Authors do a great job of showing us Rachael:

The ice in Rachael’s glass is RATTLING. She’s standing
only a few feet away, half eaten by shadows, her eyes
blank with shock.

Subtext in description. I dig it. BUUUUUUT then they ruin it with the very next line:

The reason the ice is rattling is because her hand is
shaking.

We’re not dumb. We got it the first time. She’s scared, and that her hand was causing the glass to shake, not some random earthquake.

This is a GREAT trick to use in our own writing. Not only are you describing things in a unique way, you’re also not spelling things out for us.

Hint that there’s water over yonder, don’t drag the reader to it by the nose.

I do think breaking up those large amounts of text (and maybe even cutting back) could greatly improve this script’s readability.

Besides the long blocks of description, oftentimes over 5 lines, the only other odd thing was how characters were introduced.

Similar to the Batty one from the previous question, they’re too long.

Then get on with your story. Their actions and dialogue in the rest of the script should let us know what type of people they are.

Free of exposition? Definitely not.

Again, I look at this as a script before it’s time. The authors bring us into a very complex future society that needs to be explained.

Think of this script as Inception’s grandfather.

Page 14 is a great example, as we get from Bryant what “skin jobs” are and why Deckard has to find them. Would it be cooler seeing why? Probably.

Same thing with the following scene (page 18) where Holden explains to Deckard how he got hurt. Problem here is we already saw it. (It’s the first scene.) The only saving grace is the relationship set up between Deckard and Holden, which shows Deckard’s not entirely a loner. He can care.

This scene would work better if they had something new to talk about, maybe something they both had trouble with when working together that can later be called upon in the story. Perhaps like Deckard helping Rachael.

Page 9 – The Japanese dialogue is set up a bit odd. Not sure we need the underlined text.

Deckard looks at Gaff. He hasn’t understood a word.

Only instance, but do we need this twice? (please, Please, PLEASE watch for this in your scripts. It’s such a silly and easily corrected error.)

Page 23: I loved the subtext in Rachael’s answers. Especially when it’s followed by Deckard and Tyrell not saying straight out that she’s a replicant. Very well done on that bit.

All in all the dialogue wasn’t bad. It did have to set up the world we’re in so I won’t completely take off for boring exposition, and I did like some of the Han Solo type lines for Deckard.

Maybe a cool graphic novel or book too, but between the stage or big screen, it’d have to go big screen.

All the elements of a sci-fi action/adventure are there.

Being that this story is based on a novel we can’t really argue its originality.

Having said that, I’ve never read the novel so maybe there were parts completely unique to the script.

That a cop out? Maybe, but feel free to leave a comment if you have proof leaning one way or the other.

The first two pages, plus the logline definitely drew me in.

The heavily industrialized future setting is very cool, as is the idea behind finding and killing replicants.

The one problem I had with it was the interrogation.

It took a bit to get into, and I felt very lost initially. I still kind of do even after watching the movie and reading the script.

A bit of clever exposition here, or some dialogue subtext, would be beneficial so we get the idea Holden is looking for something nonhuman.

7.) Is that hook effective?

This is probably why I’ve never been able to watch the movie beginning to end in one sitting.

(Another reason might be because I’ve only watched it on cable channels with commercials in between.)

I like how Leon injures Holden, in a way that makes us wonder what exactly he is.

I also like how Deckard is introduced in this dirty and grimy world.

Then I even like how Gaff brings Deckard in.

My ONE BIG problem was how Deckard flip flops with this line from page 14 serving as the inciting incident:

DECKARD
Forgot there for a minute about
the little people. No choices
I guess.

Should have been a more defined event to suddenly make Deckard want to embark on this journey. We even kind of have an earlier reason there in that he seems to be fond of Holden, so why not use that?

The rest of the script was well paced and kept moving.

I liked the alternate story with Rachael, especially considering the twist at the end.

I liked Deckard picking off the Nexus 6 units one by one.

One part I didn’t like was the snake bit. It seemed kind of odd how Deckard was able to tie that all together. Almost like he stumbled onto the replicants, that one in particular.

The other problem I had was the twist ending. It really didn’t happen until the very end.

I’m not sure if we’re left to wonder if Deckard is a “skin job” himself, or if he just actually is.

If the script was written today, I have a feeling that twist would come around page 75 and have something to do with Rachael, causing BIG TROUBLE between her and Deckard.

In all honesty, this would have delivered more bang for the buck compared to how the script actually handles it.

If I’m looking at the right figures the movie made $32 Million to date while only costing $28 million. That’s a gain, so therefore a success.

***I’ll make it simple and treat 1982 dollars like 2012 dollars, even though I know that’s not anywhere close to accurate.

The two small things I think a reader will have trouble with (since we can’t see the screen when reading a script for the first time) are:

1.) Deckard saying, “Espa?” which refers to the computer, but this is never really stated. I actually thought someone else was in the room with him.

2.) Gaff apparently has been working on a small metal unicorn the entire script, but it only shows up at the end, and Deckard magically takes it with him. (Apparently it allows Gaff to track him.) This seemed like a cheap trick at keeping the story open for a potential sequel.

I liked the script, and was able to finish it, at least, in one sitting.

The story was paced well, and I’m a sucker for sci-fi, so that helped.

Does Harrison Ford play a character like Han Solo or Indiana Jones? No, but the dialogue here was reminiscent of that.

Like I said earlier, nothing fancy, just plain neat.

Super – NOT a Guardians of the Galaxy Vol. 2 Script...