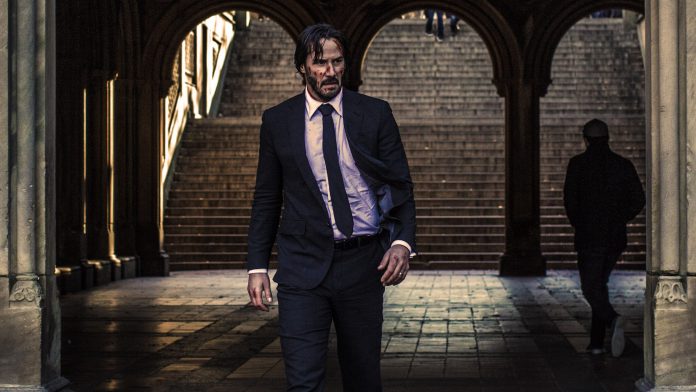 For some dumb reason I skipped both films when they were out in theaters. I have no idea why. The first film I waited because it was pretty much an unknown. Plus the plot sounded too much like the film Revenge for Jolly that came out a few years before it. And if I had the choice to see one over the other, I’d pick Revenge for Jolly. I just kind of love that movie. Also, it features a then unknown Oscar Isaac.

So when it came time to check out John Wick, I rented it. By this time I was pretty excited to see it. I had gotten my new TV and new sound bar, so I was ready for an awesome action film. But something seemed off while watching it. None of the gunshots or explosions had any bass to them.

So I stopped the movie and check the subwoofer. Apparently my fucking cat chewed the cable in half. That’s when I learned she loves chewing on cords, that little rat. I’ve never been as pissed with her than that moment. I had to splice the wires together, sealing it in duct tape. It looks great now. That was sarcasm.

By then I was too angry to really focus or enjoy the movie as much as I wanted to. So that kind of ruined my first John Wick experience.

No chewing went on when watching the second film thankfully.

John Wick Chapter 2 might be the best action film I’ve seen in many many years. It tops the first film in so many ways. You’ll get hyped just by watching those Keanu Reeves training videos on YouTube.

The guy is kind of amazing. I’m pretty sure if he wasn’t an actor, he’d most likely be a real hitman. An unstoppable killing machine and for some reason everyone just has to fuck with.

People know how dangerous John Wick is. They tell stories about him, his nickname is The Boogeyman for Christ sake. Stop trying to start shit with this guy, it won’t end the way you want it to.

But of course we need a sequel, so here comes another moron who thinks he can get John Wick to do what he wants by force. This time by a Marker. No, not a magic marker. This Marker his John’s bloody thumbprint in it. If the holder of this Market ever comes to you and asks for a favor, you MUST obey that order. If you don’t like John does, you get your home blown up with a grenade launcher.

The little weasel taunting John this time around is D’Antonio. The only cool thing about him is he keeps Ruby Rose by his side, whose character is mute. 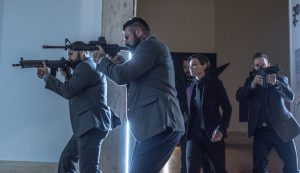 Okay, I might bring this up since I heard Max Landis bring it up and couldn’t ignore it while watching the film. There are only two women in this whole movie and only one gets lines. And that doesn’t happen at least 46 minutes into the film. I don’t know if that’s a complaint or not, but once you notice it, it’s hard to ignore. I don’t think it was done intentionally. Like how in the original Power Rangers tv series the black guy was the black ranger, the girl was the pink ranger, the yellow ranger was Asian and the red ranger was native American. And the blue ranger was gay. Okay, maybe not that one. I don’t think there was any malicious intent behind it, just an error on their part.

So now that that detour is out of the way, let’s move right along to the action. Because this movie is about 90% action. I guess you could say it was a little thin on plot, but I’d argue that the action was the plot, much like Fury Road. This time around, we delve deeper into this hitman organization. I’m guessing just about everyone is a member in some way. There’s even a cabal of homeless hitmen, led by Laurence Fishburne.

D’Antonio visits John late at night at his home, asking him to do a job for him. He wants John to kill his sister Gianna so he can take over her territory in New York. 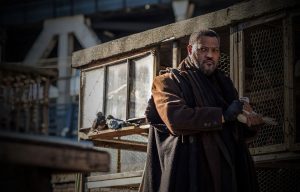 John is no dummy, he knows this asshole isn’t going to double cross him. So he loads up on assault rifles and shotguns, planting them in his planned escape route, an underground catacomb.

When John Kills Gianna that also turns her bodyguard against him played by Common. The last time I saw him, he was getting mauled by a bear in Hell on Wheels.

Here he plays Cassian. He isn’t exactly up to John Wicks’ skills but he does give him a run for his money. There’s actually this outstanding sequence where they’re in public, secretly shooting at each other in a crowd without anyone noticing.

Trying to out run him, John also has to fight off the army D’Antonio has sent after him. Which also includes Ruby Rose’s character Ares. Who I had no idea was named Ares until I looked on the John Wick Chapter 2 imdb page. You think she’s going to be some badass or something. But when it comes time for them to fight, it lasts for like 30 seconds.

Hubris, man. It will get you every time. Everyone is so damn confidant they can stop this guy. Even as they pass 20 dead guys to get to him. Yeah, I’m sure nameless bearded goon number 8 is going to be the one to finally take out John Wick.

After Ares fails to kill John, D’Antonio puts a hit out on him, a contract sent out to every hitman looking to make 7 million bucks. Remember what I said, everyone is a hitman in this world, so John is caught constantly by low level killers looking to collect his bounty.

The head of this cabal of killers is Winston played by the always great Ian McShane. If you aren’t watching American Gods, you should be. The rule of his house is, if you’re in one of their hotels, there’s no violence. It’s a safe haven, no matter what. You break this rule, you get excommunicado. Not to mention the whole organization comes after you.

But John being the unstoppable killer he is, welcomes it, shooting D’Antonio in the head as he mocks him, thinking he’s safe because he made it to a safe haven. Now John is kicked out of the group and has to run for his life, knowing people are going to be after him, waiting around every corner.

And that sets us up for another sequel, and I can’t wait! Hopefully I’ll actually get around to seeing that one in theater.

Come to Daddy – From the folks who brought you Mandy!

Bombshells and Dollies – A Pinup Documentary

Cats – The Cap’n DARES You to Say You Like It!

Jurassic World: Fallen Kingdom – Why Dinosaurs are like Scraped Knees.